Presleys been spunky lately & is developing more and more everyday into such a little darling person. I felt like it was time to update her room a little bit to match her personality. Her ‘nursery’ colors were white, grey & soft pink. Perfect for a calm babies room, and some of my favorite colors. Now that she’s constantly moving and crazy and fun – I thought it would be fun to add some bright colors to her room (more on that later). Of course, I headed to pinterest for some ideas and saw string art. I’ve always been a fan and wanted to attempt something, but it honestly came down to just not knowing where to put such a project. After staring at her room, I found the perfect spot & got to planning. I took some very rough estimates & sent the hubby to Home Depot for a huge piece of wood. If I can avoid that place I will – I can aimlessly walk around for an hour and not find anything I’m looking for – so I’m thankful Chad didn’t mind going. PLUS, he got a PERFECT piece of wood (hardy har – I know some of you are going there. 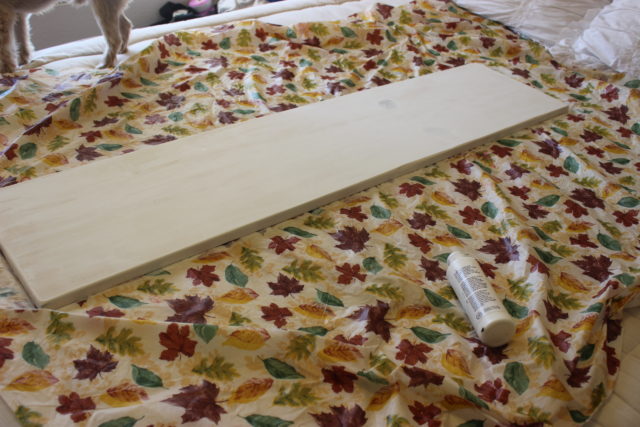 First step: (Didn’t cut down this piece at all, purchased this size) Sand the wood. I did a really good job of making sure this thing was super soft. In the end, we got very close and personal after nailing close to 200 nails & LOTS of thread – so I wanted it splinter free. I rounded the corners and edges just a little bit – because I like that softer rounded look. Then, watched these two lovebirds make out: 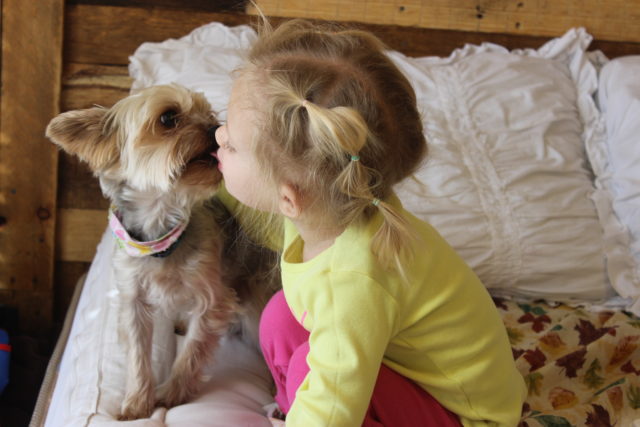 Step Two: Paint wood. Presleys room is grey (Chad won’t let me paint it white to match her new color theme) so I wanted the wood piece to stand out and match the furniture in her room so I painted it all white. One of the new colors is a bright blue – so I instantly fell in love with the idea of the white/blue matchup and ran with it.
Step Three: Spend hours obsessing over fonts. I literally spent a good week obsessing over fonts and still probably am obsessing over whether I chose the right one. I know, weird. Dafont.Com is AMAZING. You can type in the word you are using & then search through 14 million billion fonts for hours and forget to feed your kid & let the dog out. I ended up making myself pick my top 4, then asking social media (bad idea), then ultimately just going with the one hubby liked the best (Kg the Fighter). We agreed that a cursive font would work best for the string art…so I trusted his expert opinion.
Step Four: Create stencil. This is where it got complicated for me. I downloaded the font, sized it all out using my Silhouette and then made a stencil, yadda yadda. The dear husband, the honest man that he is – told me it was wonky and crooked & too thin & so, the project was put on halt. Bummer because I already nailed part of it – so I ripped out the nails, used wood filler & then repainted and started back at the beginning of step four. 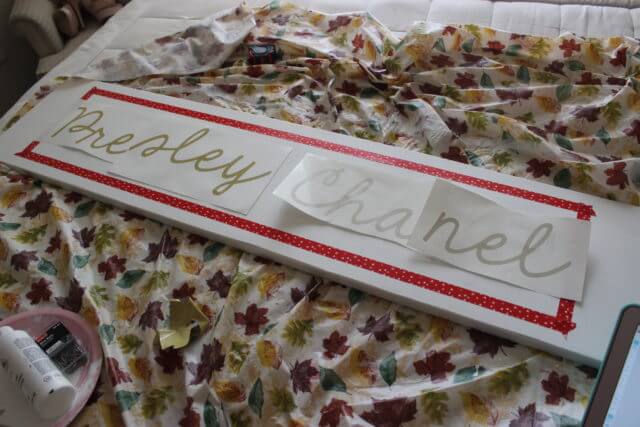 This time, to get bigger lettering and to not use fourteen million pieces of vinyl, I printed (actually Chad did, I wont lie) out on normal paper with our printer just ‘Presley’ in huge bold sizing and then I made copies of it with copiers and I taped all the pieces of paper together and lined up the font so that it looked like it all connected (each letter was a page). Then, I taped that down to the wood, used a push pin to outline each of the letters with my nail spots & then removed the paper. Oops for not taking more pictures here….. 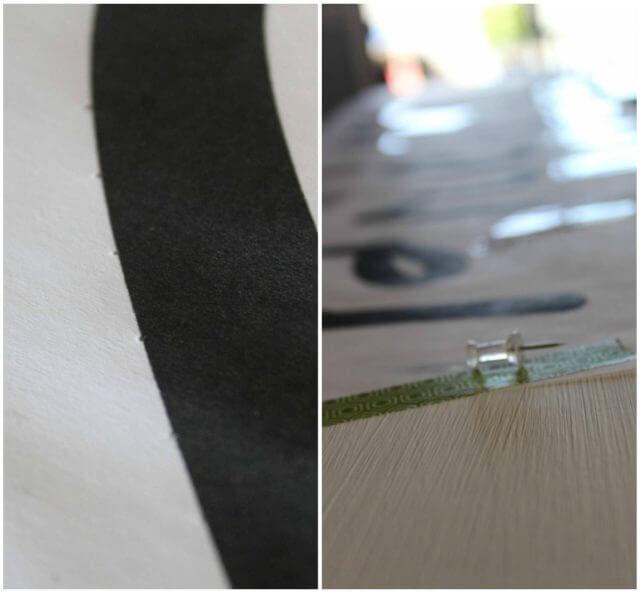 Step five: Nail. Oh heaven hallelujah this was tedious. I used needle nose plyers to hold some of the nails so that they were close enough & went through two little boxes of nails. The neighbors probably thought we were adding a room to our house with all my banging. I chose a nail that was silver, short, but had a big head. I grabbed three packages of them at Walmart – and ended up only using 2. I tried to keep them equal distance apart on the straight-a-ways, and then a little closer on all the curves so that the curves would be prominent with the string on it. Does that make any sense…..I’ll stop typing.

Step six: String. I used embroidery thread that I found at Michaels for 39c a thing. I ended up using almost 3 of them for the entire project (i bought over 10 thinking I’d use a ton!). There are 6 strands and I separated that and used 3 to do all the criss-crossing. I went over it all once, then went back in certain spots that looked a little thinner or that needed some crazier criss-crosses. Then, went back and used all 6 around the border of each letter to make it stand out more. This was soooo time consuming – it took two naps, plus time while dinner was cooking and Presley was occupied with Grandma and even one night after she went to bed. The tricky part is that you have to do smaller sections of string and wrap it around each nail and hold it taut, while finding another nail to go to, then tie is off and blah blah. Tricky stuff. My fingers hurt after each string session! I am very glad the hubby suggested doing it bigger and only her name. I cannot imagine doing it any smaller than this! 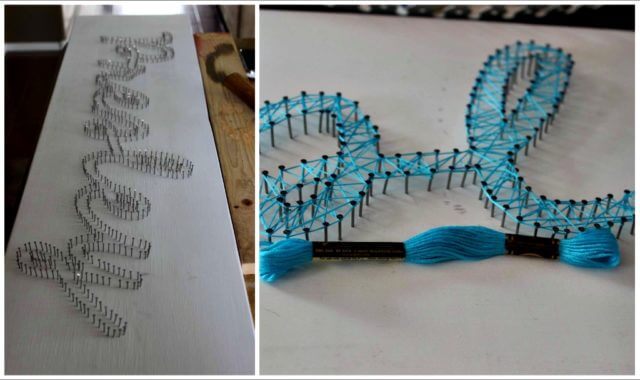 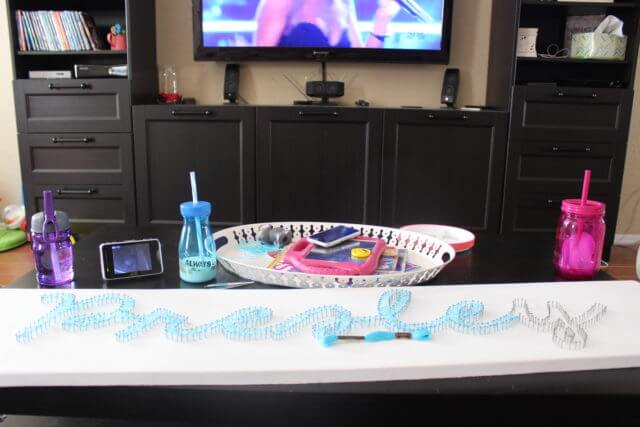 Step seven: Touch up and admire. I went back and added more white paint around some of the letters (I might have gotten a little out of control with the hammer) so that the white was perfect. Then I added some hardware to the back and hung that baby up!

This is a quick before picture of the space I picked: 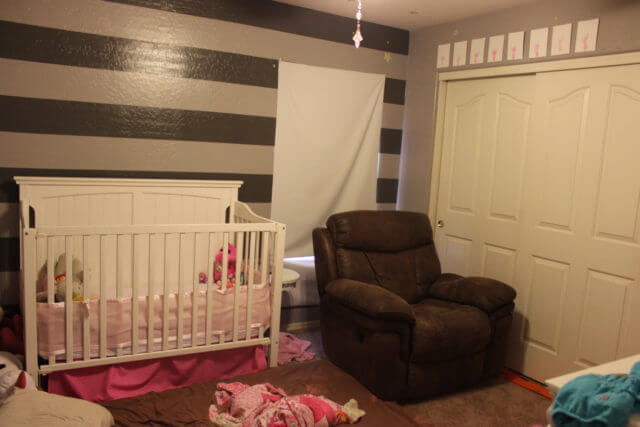 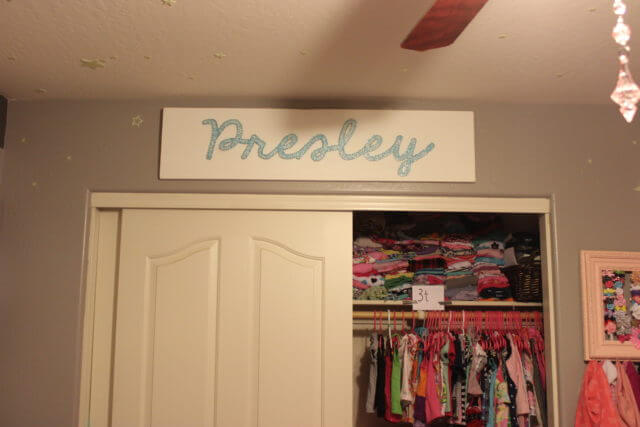 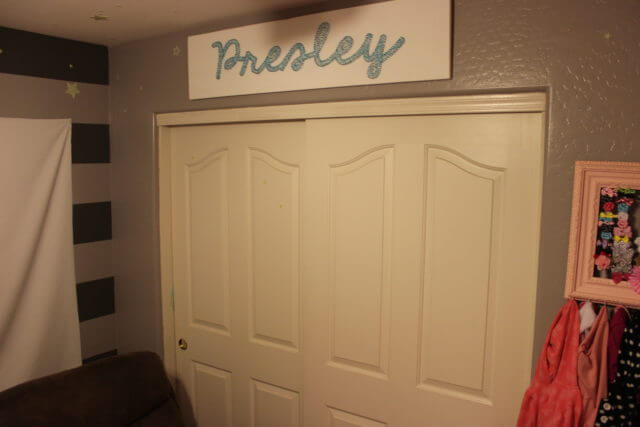 I am sooo excited with how it turned out, but BOY was that a labor of love. I promise I’ll share more pictures of her room as I finish all the Toddler Room projects….but for now. I’m off to sleep train the Toddler in the big bed and try to catch up on some Spring Cleaning….